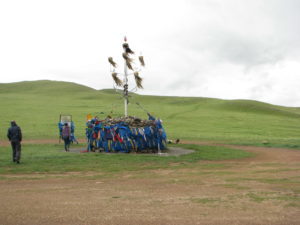 Ubiquitous on the landscape of contemporary Mongolia, Buryatia, Inner Mongolia, and Eastern Tibet/Qinghai, structures of stones or trees covered with scarves, skulls, steering wheel covers, and a staggering array of other objects known as ovoo have long marked sites where ritual, though often highly spontaneous, practices invoke the presence of immanent relations. Built and maintained by various publics, gatherings at ovoo have over past centuries been major sites of political action, where the identities of and relationships between more and less local shamans, lamas, imperial officials, businesspeople, bureaucrats, politicians, and nonhumans are narrated, contested, and re-defined.
While Mongolia struggles to assert itself on the world stage and lives of Mongolians are undergoing rapid change, the ovoos continue to represent not only a key aspect of traditional culture, but sites at the core of debates on development, ownership of land, mining industry, ecology, and the environment. This project brings together scholars from Northern California and from France to present research, develop new insights, and formulate research directions in the fields of anthropology, art history, East Asian Studies, and religion pertaining to political ritual in Inner Asia.